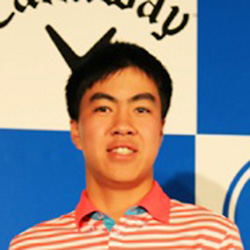 Hi my name is Putt Sridama from Bangkok, Thailand. Now, I am studying at American School of Bangkok (ASB) at 12th Grade. I am 18 Year Old. I live with my father and mother. I am only one child of my family. I have started play golf since I was 10 Year Old. I started to compete in the junior golf tournament at Class C Boy (11 – 13 Year Old). At first, I competed only 1 day tournament in order to gain more stability in my golf game. When I earned more experiences in golf tournaments, I have played more varieties of junior golf tournaments (1 day, 2 days, 3 days, 4 days, Match Play, and International Tournaments). For international tournaments in other countries, I really liked to play in those tournaments because they were challenge tournaments. Further to that, I could travel to the place that I never go and have a chance to play in the new golf course around the world in the different lay-out of golf courses and atmosphere. I had to adjust myself on how to plan for playing in those golf courses. In addition, I could meet and exchange way of playing golf with my international friends including learning more on the different culture and way of thinking on how to play from them. Now, after school, I go to practice during weekday. During weekend, I will go to compete in the tournament (if any) or practice for 18 holes at once a week.

In April 2016, I flew with other qualified junior golfers, my and their parents, golf coaches, and Mr. Tony Meechai including Mr. Kenya Tanaka and Mr. Sam Ho from Enagic, Thailand (about 40 people) to Okinawa, Japan to compete Enagic Junior Championship Asian Qualifier 2016. This was my first time to visit Okinawa. We received very warm welcome from Senior Executives and his staff since we landed at the Okinawa airport. I also had a chance to meet with Mr. Hironari Oshiro, the President and CEO of Enagic. There was a welcome party at the Enagic. I also met Japanese junior golfer who attend the Enagic Golf Academy. I had 2 days for practice rounds. After practiced, we helped each other to pick the golf ball in the driving range. I believed that this kind of activity it could build relationship between Thai and Japanese golfers besides the welcome party on the day before. The golf course is very beautiful. On the practice days, I had to take note and plan on what I have to play on the golf course. I could not tee – off with a driver in some holes because such holes has dog-leg for left or right. If I hit with a driver, I was in a trouble with OB. I admitted that the golf course lay-out is quite difficult including it is located near the ocean so the wind is the main factor to play on this golf course. The tournament rounds were on 3 – 4 April 2016. During the tournament, there was raining and windy on the second day. The tournament was suspended for 1 hour and resumed to play after that. Finally, I was the winner of the tournament with score 68 and 72 (2 under par). I was also got a seat to play the AJGA Enagic Golf Championship Tournament in the U.S. on July 2016. There was also a ceremony after the Event. It was a very special moment for me. I was recognized by Enagic and had a speech in such event. After the tournament, I and others friend from Thailand went to visiting and sightseeing in the Okinawa area including playing bowling at the Enagic Bowl in the Okinawa downtown. It was another good experience for me since this was my first playing bowling. Then we flew back to Thailand on the next day. After that, I took a rest for a few day and then start to practice on my golf game again in order to prepare for the next Enagic tournament in the U.S.

In AJGA Enagic Golf Championship Tournament on 19 – 21 July 2016 at the Legends Golf Club, Temecula, California, I arrived on 16 July 2016 and went to practice on the same day. I thanked to Mr. Tom Kanazawa who is the Enagic representative. He helped and arranged the practice round for me including advised me a lot for my trip to Temecula. The weather in Temecula was quite good. I also had a chance to practice for another day on 17 July 2016 with my Japanese friends. I was very glad to meet them after Okinawa tournament in April 2016. There were about 70 junior golfers from around the World to compete in this tournament. Some of them were from California State. Some were from other countries in Europe and South America including Asia. For this golf course, I had to plan on how to play because many holes have dog legs and many bunkers and green is too fast. So I had to get used to above mentioned factors prior competing in the tournament. I scored with 3 over par due to having 3 putts for some holes and did not do well on shot to green on the first round. So on second day, I did better to shot 1 under par but still having to focus more on shot to green and on the putting game. For the last day, I did well on my driver, my shot to green and my putter by having a score of 6 under par. I had 7 birdies and one bogey. It was a great come back round for me. My rank was raised to T9 from T32 with score 75, 71, and 66 (4 under par). For the ceremony, Mr. Oshiro, CEO of Enagic International and Enagic Executives attended and presented the award to the junior golfers. I felt very impressive of what Mr. Oshiro has done for junior golfers. The event was also very well organized.

In addition, I was invited to join the Engaic Global Convention at Madalay Bay Resort and Casino at Las Vegas during 27 – 28 July 2016. I went there with my parent. We drove from LA to LV about 5 hours. The weather at Las Vegas was quite hot. The Enagic convention was full of crown and the presentation was quite impressive. There were about 4 thousands of representatives from around the world joined this convention. I had to chance to attend both morning and dinner session. I also helped to sell golf materials during the convention in order to raise a fund for the academy. I was very excited when I went to stage to introduce myself and other junior golfers. Mr. Oshiro also gave me and other junior golfers to participate in his show with his family during the dinner session. It made me feel a great honor from Enagic.

Finally, I would like to thank Mr. Oshiro to initiate the wonderful tournaments for junior golfers especially giving opportunity to junior golfers in Asia. This opportunity can be aspired junior golfers to reach their dream. For myself, I had a chance to meet new international friends, learn new culture, and attend international events. I believe that the aforementioned would not happen if there was not a support from Mr. Oshiro. I would like to say big thank you to Mr. Oshiro for the great support and hospitality. I also hope that Enagic will keep continuing to have this kind of tournament in every year.